Please welcome Krista & Brandon on the blog today from Stauffer Dairy in Washington! Brandon & Krista have a small family farm where everyone helps out to make their dreams come true! 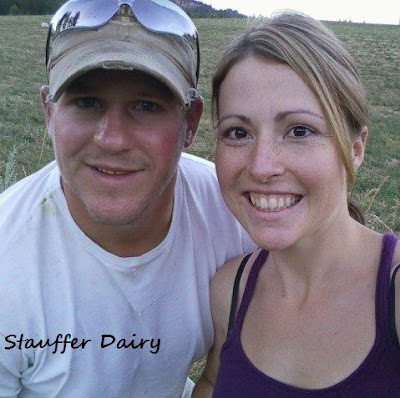 In 2008, he decided that it was time to make his dreams come true. His grandfather & father no longer dairy farmed so he would have to figure out another way to get in the industry. He began the process & started seeking out potential dairy farms to lease. After going through all the motions he had found a dairy farm, had the startup loan, found some cows to add to the 20 he raised himself and it was go time! He moved away from everyone & everything he had ever known. In May 2009 he started milking cows. He worked endless hours, battled tremendously low milk prices & all with moving to a county where he knew only a couple people. 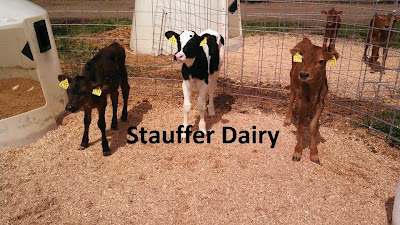 I was not born on a farm & knew next to nothing about farming especially dairy farming. My great grandma was a dairy farmer, but I knew very little about what she did or how she did it. I was just a kid when she was still milking cows. She did pretty much everything on her own. I met Brandon the summer of 2009. I was actually trying to set him up with one of my friends. We began dating the end of August. I had a daughter from a previous marriage & we found out we were expecting in May 2010. We had our son May 2010 & were married July 2010. I dove in head first into the world of dairy farming. I took on the books, the calves, helped with milking & basically anything to help take some work off Brandon. There have been plenty of times where I have had a baby in the front pack & carrying two five gallon buckets of milk or a stroller in one hand & a bucket of milk in the other. We had our youngest son in May 2012. I have taken on the task of agvocating for the dairy industry. I have a Facebook page & a blog. I try to post daily on Facebook but find it hard to make time for the blog. In addition to everything, I have taken a job off the farm two days a week. I felt it necessary to have something of my own. 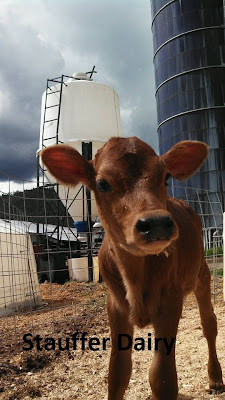 Brandon is the brains of the operation. He is very business orientated & is the main laborer. An average day for him is up early in the AM to feed cows. He also feeds the calves as we have a new program & not too many calves right which means feeding calves doesn’t take much time. He fixes anything that needs fixed from fences to tractors. He tends to any cattle that may be sick or calving. Pretty much anything & everything on the farm he does it. Then most nights he milks the cows. When the kids are cooperating we help with the night milking. We are very fortunate after four years to have some reliable help. We have two part time milkers that do all the morning milkings so Brandon can feed cows. With the exception of 2013 the last couple summers we had all our hired help quit in the middle of silage season leaving everything to us. We got creative & made it work. If the weather was bad the kids watched a movie during milking in the milk house. If the weather was good, they played in buckets of water or a pool in the milk house. Our youngest son slept in the swing in the parlor or a pack on mommy’s back. Makes milking really fun! ;) We have chickens & love our farm fresh eggs! AND of course we have plenty of beef!! 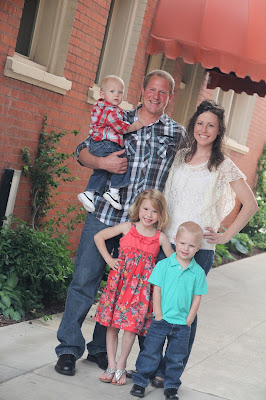 What we both wish people understood about farming is everything! We wish that people understood what it takes to farm & that is not for the money. The public tends to think dairy farmers all abuse their cows & that we do not care about them. It’s simply not true. Dairy farmers simply cannot afford to not take the best care of their cows possible. Happy, healthy & comfortable cows produce milk. The cows have to be able to pay for what they eat & then some and in order to do that they have to be happy & healthy. We spend 24/7/365 taking care of our girls. Also we would like everyone to know how important it is to support all farmers from organic to conventional. From hobby farm to “corporate” farms. Every farm & farmer has something to offer & we need everyone to feed the growing population. There is not one way of farming that can be applied to everyone, to every farm or every part of the world. Farmers need support more than ever. Know your food, know your farmer. 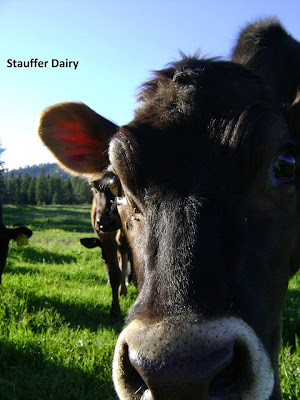 The past four years have been tough as a new dairy farm especially operating on a cash flow only basis. We have amazing support & great relationships with our local farmers in which we buy feed from. Time spent with family & the way of life is why we do it. It’s not for the money, well because there is no money to be made in dairy farming. It’s 2013 and we are still going strong. Everyone said it would be over in the first year & we are not ready to give up. We have dreams of owning our own farm & plan on making that a reality some day!

Thanks so much to Stauffer Dairy for the great feature! Be sure to keep up with Krista on her blog, Facebook page & Pinterest account!
Posted by J.Rhoades at 9:42 AM

We're a couple of midwestern girls looking to tell the story of agriculture. We're here to tell the stories of the real people in the agricultural industry. We're more than just cows and crops, we're people and families and generations of hard work.

The purpose of this blog is to highlight farming families, individuals and their way of life. It takes small farms, and big farms to feed the world. These are real farms with real people. Progress on agriculture issues cannot be made without viewing all sides of the argument. We encourage questions and conversation – however, we ask that you keep your comments civil and respectful. We reserve the right to intervene and/or delete comments that do not follow those guidelines. Thank you!